Posted at h in Archive, Current by 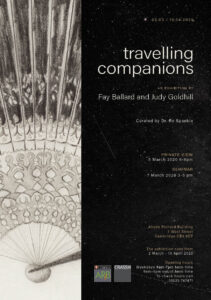 Please see online for details, installation shots and film, Objects of the Week and blog

This exhibition has been conceived by curator and academic, Ro Spankie, in collaboration with Fay Ballard and Judy Goldhill.  – An online version of the catalogue is available at – http://www.arbart.crassh.cam.ac.uk/travelling-companions/

In her book ‘Evocative Objects, Things we think with’, Professor Sherry Turkle, a psychologist at MIT, suggests that objects act as emotional and intellectual companions that anchor memory, sustain relationships, and provoke new ideas.

The exhibition explores these ideas contrasting the work of the two artists. Fay presents pencil drawings of objects belonging to her family that she found when clearing her father’s house 40 years later. Each object tells a story and brings memories of her childhood flooding back.

In contrast, Judy photographs the night sky, together with the massive observatories and telescopes that allow us to look beyond this world. The skies offer sites of wonder – and a sense of far away, but also a familiarity of home. Traditionally constellations of stars have acted as navigational tools, guiding travellers and giving direction, acting as a different sort of travelling companion to Fay’s domestic objects.

From a souvenir fan charged with significance, to a star guiding you across the globe, the exhibition contrasts two scales, the personal and the collective, exploring how familiar objects act as travelling companions, both in the present and as remembered (internalised) objects, their function and the stories they tell changing over the course of a lifetime.

Alongside the exhibition fellow travellers have been invited to describe their travelling companions in image and text as part of Objects of the Week. Released in digital format these can be viewed at http://arbart.crassh.cam.ac.uk/travelling-companions-online-exhibition/.

Ranging from representations of self, of home, of someone loved, to more practical things that the individual can’t travel without, these objects both expand on ideas in the exhibition and form a reminder that none of us travels empty handed.